A Snazzy Session with Streetlight 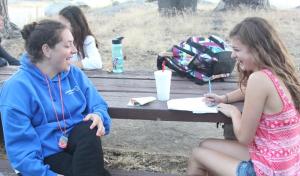 One of the people who make camp happen every year is Streetlight. Streetlight is super fun and always in a good mood! Although Streetlight is great at what she does, she would never have thought she would have this job ten years ago. Streetlight loves camp so much that she even has countdowns when camp is almost 100 days away. Streetlight says she thinks she was made for camp.

You may think you know all there is to know about snazzy Streetlight but I have managed to uncover some fun facts such as her least favorite camp food, which are powdered eggs. Her current favorite music genre is creative folk, not super folky though. If Streetlight could be any animal she would be a blue whale because they are big and float in the water. Streetlight’s favorite verse is 2 Corinthians 12:9. Streetlight enjoys this verse because it reminds her God’s grace is sufficient and He is always in control. Streetlight says that if she was stranded on an island and it flipped over it would be bow tie pasta with olive oil and pesto sauce with grilled chicken. Streetlight is really fun to talk to and I enjoy getting to know her more each year.