Setting Our Minds on Things Above

“Set your minds on things above, not on earthly things. For you died, and your life is now hidden with Christ in God. When Christ, who is your life, appears, then you also will appear with Him in glory.” 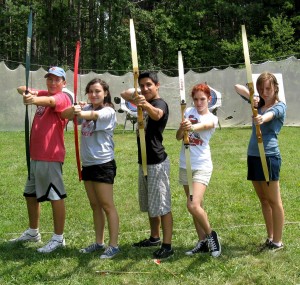 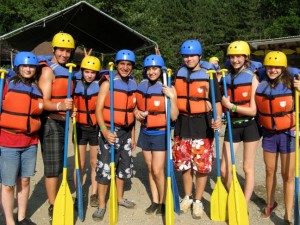 David Mi., Age 15
Tribe of Naphtali
[[Pieces of this article have been modified to protect Strings’ safety.]]
Strings is an awesome person. She loves 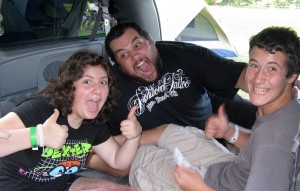 Jesus. Strings also likes Justin Beiber. Justin Beiber is weird. He is always squinting. If you shaved his head and covered him in feathers, he would look like a squinting finch. A finch is a type of bird. Strings likes birds, especially finches. Strings also likes smiley-faced French fries, which I kept stealing from her at dinner. Strings has awesome sunglasses. Throughout the entire white water rafting trip, I stole Strings’ sunglasses. I eventually stopped and Strings was happy. Now Strings lives in peace somewhere in Canada.

Masha K., Age 12
Tribe of Asher
For tribe time at camp, my tribe went to the ropes course at Camp Pinnacle. We had a great time! There were some really hard obstacles to get through but we all worked together and made it through. 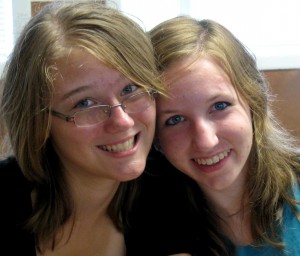 One of the obstacles was a spider web with bells in it. The point was to get through the main hole in the web without ringing the little bells hung all around it. In our cabin, no one made it through the hole, but Esther came really close. She had two people on each side holding her and trying to help her through and she almost made it, but couldn’t get all the way through.
There was also an obstacle that was just a long, plain wall without any grips or anything to climb on. For this obstacle, you have to try to help each other up and over the wall. To get up the wall, we had Noa, Rena, and Strings standing on the ground helping push people up the wall. Esther was the first one to get to the top, and she helped pull people up. After she got there, I got up the wall and so did Simone and Noa.
Another obstacle was this long pole with a tire on the top. We were supposed to take the tire off the pole and put it back on, but we couldn’t really do this one. When we tried it, we had Rena and Noa on the ground, pushing people up so they could try to reach the tire and push it off. It didn’t really work. So we went to another one.
The last one we tried was the tightrope. On the tightrope, each person took a turn walking across the rope with two people on the ground holding their hands and holding them up. When Rachel went, Esther and I were holding her up, but she fell. She tried again and made it across the second time! When Chloe went, she made it all the way across and then went backwards too! It was so cool!
It was definitely a cool way to spend our tribe time together. In each part of the course, we had fun and stayed together because everyone had to help each other out. It also made the whole course easier and helped us get used to being together. It was a lot of fun and you should go try it too! 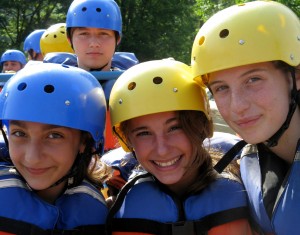 Dana C., Age 13
Tribe of Gad
While we were whitewater rafting, five minutes into the trip we asked our tour guide what would happen if he fell in. He said, “I don’t know, it never happened before.” Towards the middle of our trip, we named our guide Ace. We named him that because he had a spade on his helmet. Almost before it was time to go back ashore, we were in calm waters and we were sitting around talking. All of a sudden, we heard a splash and saw Ace in the water. David grabbed his paddle and then Ace got back in the boat. I had so much fun!

Modeling with Tank and Strings 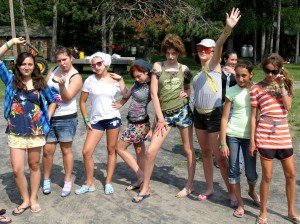 Having Tank be my modeling coach was one of the most umm…interesting experiences of my life. First we decided to get dressed in incredibly obnoxious clothing. (ex: Simone’s peacock shorts.) Then we headed over… He (Tank) was wearing a scarf, head scarf, and a, well, a tiara. (Don’t ask.) So we were having so much fun taking pictures but we had to start. We worked on our model walk, our partner model walk, our insulting comebacks, how to treat a flight attendant, posing with nature, posing with modern items, and our model pilots. I also learned about attitude and model decisions. More things I sort of already knew were that I was good at comebacks (that comes from having a little sister) and my modern item posing is fabulous…haha. But modeling with Tank and Strings is by far the best teen camp activity in 2010 Gilgal. 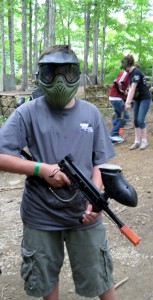 Cyndi R., Age 14
Tribe of Gad
Paintball, you hurt me so bad
Paintball, you make me so sad
I went there to have lots of fun
But you ended up putting me on the run
Oh paintball, you flew through the air
With not the slightest hint of a care
And faster than I could see
You came in contact with my knee
And then there was pain
More than I thought I could maintain 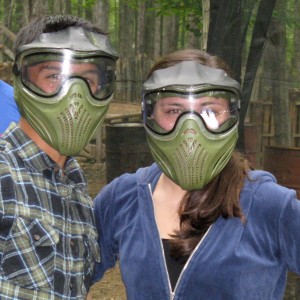 I seriously felt that I was going to die
But then I realized – I was fine
So paintball, I’m writing this letter
Just to tell you, I’m getting better. 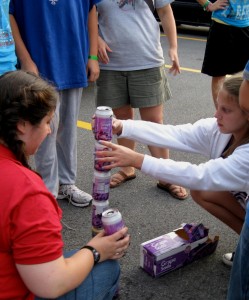 David Mo., Age 14
Tribe of Naphtali
On the second day of camp in the afternoon, we went out of camp for a competition named the Decathalon. One of the games in it was that your team had to drink a can of soda each. Then you had to stack them and make the tallest structure. When the game began, four people did not want to drink their soda so in order to win I took all their sodas and mine and drank them in under three minutes. Our team was ahead and built the tallest structure but after I felt really sick and wanted to throw up but luckily, I didn’t. I didn’t want to continue the tradition because I threw up last year from the overconsumption of soda. My team ended up winning the whole competition. 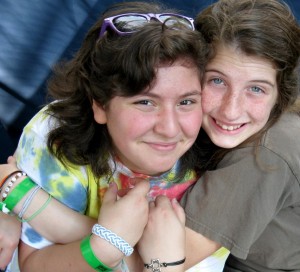 Most people are extremely cranky when waking up around 6 am, but this Thursday morning at East Coast Camp Gilgal was particularly bad. I had slept outside that night during our camping trip.
So there I was, bitten up, sitting in the car, going to the place where we would receive our rafting gear. After getting the gear, we took a bus to the river where we would raft.
It is impossible to describe the emotions that I was experiencing as I was standing above the first raft I had ever seen, apart from on TV or in pictures. As I got into the raft, I felt that every stroke I made into the cool, fresh water made me stronger as a person.
After about an hour of seemingly intense rafting, I started to get the hang of it all. I was learning when to brace myself at every wave and how to paddle strong strokes in sync with my fellow rafters.
There isn’t much more to write about, as the rest of the trip was the same. Extremely fun, but nothing worth writing. That is, until 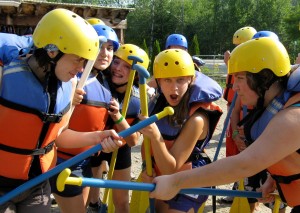 we started surfing. Raft surfing is extremely fun, and wet. We did two side-surfs (where the raft is facing sideways against the waves), and then we did our last surf, a front surf. This requires the entire team to throw themselves to the front of the raft in order to stay in place.
When it was finally our turn to surf, we rowed hard against the current, but it wasn’t strong enough; we were drifting away. But with a few strong strokes we were back in. I quickly threw myself into Tank, and within milliseconds I had an elbow in my chest. I felt myself drifting away and I opened my eyes to see that we weren’t at all. We were surfing. It was INCREDIBLE. We were getting splashed by waves. I looked around and saw someone taking a picture of us. We must’ve been in there for about a minute but it felt like hours. It was amazing! After the surf, there were no more rapids, so it was not as fun.
Finally, I would like to say that white-water rafting was by FAR one of the funnest activities at camp. 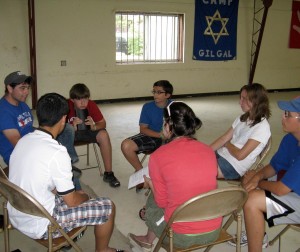 Rena B., Age 14
Tribe of Asher
Over the week of Camp Gilgal, I feel like I got A LOT closer to God. Every night before bed, we had devotions with our cabin, which helped me with living like God wants me to. All of the Tabernacle lessons and Bible topics were really good, and got me thinking about God more than ever before. The worship was also really good, and made me feel really happy and close to God. I had a conversation with some staff and campers. We talked about everything from relationships to peer pressure, and they gave me a lot of good advice, and made me think about my life and relationship with God. I feel like I really needed this time to grow in God’s spirit. 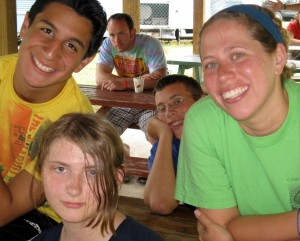 Ana G., Age 13
Tribe of Gad
Singing in worship brings me to tears. God always does big things in me at camp. I sometimes feel as though my world is being turned upside down. I sometimes hear God speaking through other people at camp, but to be truthful I don’t always listen. When I do I see the change. Camp has always been like a spiritual sanctuary, a place to be alone with God even though I am surrounded by people. I love camp and I love God! 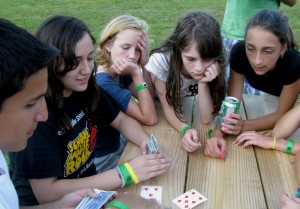 I am new at Camp Gilgal. It has been really fun and amazing. We do activities such as super modeling, fake running, field sports, wilderness survival, soccer, newcomb, and a lot more. We also study the Bible. We go whitewater rafting and camping. We eat marshmallows and s’mores. We go swimming in the pool and have chill time. That’s when you do whatever you want; you can play cards, board games, and much more. We also have tribe time when you spend time with your tribe. The food is really good and I enjoyed my time in camp. 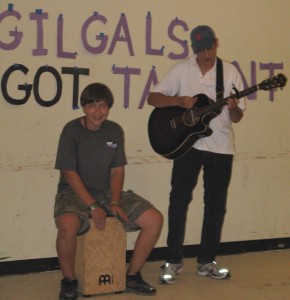 Austin S., Age 14
Tribe of Naphtali
This week, we did many activities and one of them was Jam Session. I played the bass with Dave Mo, Tank, Skittlez, Rachel and Micah. We did a parody of “Seven Nation Army” by the White Stripes. We had a lot of fun and we goofed around. It wasn’t bad but the White Stripes would laugh. 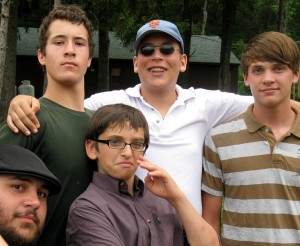 Tribe of Naphtali
I love worship at camp. I love to play and listen to music – it is my life. I am really glad that God gave me the gift of music. I love to play worship music because God gave me this gift to use and because I feel closer to Him in it. I plan to play music for the Lord and the Lord only! I lead worship at my Bible study. I lead it once a week on the drums during the year. My favorite songs to lead are “Pharoah Pharoah,” and “Let Our Hands Be Lifted Up.” The thing I like about camp is worship!
﻿