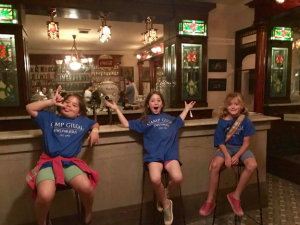 This year at Camp Gilgal, we went to the Grand Rapids Museum. It was a lot of fun. There were many exhibits and most of them were hands on. One exhibit was a section based on the logos. There were three shops you could go into with people in them who talked to you about the store and all about the 1890’s. One store was a printer store. There was a nice man who talked to us about the printer. It was really cool. It worked faster than a computer! I think the best part, and everyone’s favorite part, was the mindbender mansion. There was a fun game there that was called spelling frenzy. You jumped on letters on the ground to spell out the answer to a question.