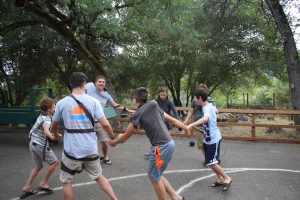 By: Ryan H. | Age: 11
Tribe of Reuben
This is what Men’s Day was like at Camp Gilgal 2019. First, we began by choosing our shield for use in the spartan wars! Next, we went to the pool. The staff organized a game using a watermelon covered in Crisco. We call it the greased watermelon in the pool. The first team to score wins! The first game my team won. The next game, the other team won. Finally, they made the staff defend the goal while the campers try to score it. It took a long time and then they called a draw and started another game that was turned out be a draw again. After that game, they made the staff coaches and my team won. And then next game my team won again! Then we went to our next activity, Gladiating!!!!! They made the swords out of pool noodle and broomsticks. I beat everyone I faced. Sam says, “I loved Gladiating so much that I almost died.” After Gladiating we got attacked by the Spartans and had to use our shields to block the water balls of death. We were done with our wars, but we started getting timed to see how fast we could run to Gadget. The fastest time Gadget was 35 seconds. After racing, we stuffed cones with a lot of sugary things and roasted them over the fire and drank men’s brew. We left our cones at the fire while we made bombs out of dry ice and exploded a watermelon and water bottles.