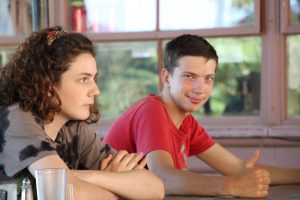 By: Jonathan P. | Age: 15
The game was coming to an end, and no cards were left to draw. At this point, all properties were set out, houses and hotels included. The remaining players did their best to pull off a successful poker face, but at this point in the game it was obvious that everyone was too tense to make a play. One of the players on the left side of the table slowly began to smile, as he laid down a series of cards that would deal a deadly blow. The smile did not last long and was soon replaced by devasted face of astonishment. Resting before him, silently on the table was the very thing Feedback most despised; a “Just say no.” “Nooooooooooo,” he screamed, and his hands fell to his side like fallen branches. “It’s not fair,” he said. “I had the most expensive property set, plus a rent and double the rent action card.” His words were true, but as his failed plan of annihilation went into the discard pile, there was nothing he could do, but crack a joke about a 5.7-billion-dollar president. The game was over, at least for Feedback, and as he got up from the table and left, there was nothing I could do but giggle like a madman. It had already been a year and half since I had introduced Monopoly Deal the card game to Camp Gilgal and still, I was the ultimate champion.