Have you ever played Capture the Degel? I have and it was fun. We played it in a national forest, and the teams were boy campers with lady staff and girl campers with guy staff. Of course, the boys won. Sonic got the degel before the end of the game. Our degel was in a valley-shaped area. I was on defense/border patrol and caught six people, Bella, Mekerah, Zamboni, Sam, Liz and Shannon. The most interesting person I caught was Shannon 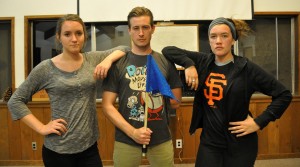 because she was a very fast runner and very hard to catch. We played as the sun was setting. The environment had a lot of trees with dead branches everywhere. The game made me tired, excited, energized (during the beginning of the game), it gave a lot of suspense and was about teamwork and trust.

Here is one of my war stories. It was getting dark, the sun was setting, and four people were already in jail. I was patrolling a ridge 50 feet near the jail. I heard a cracking of branches nearby. Then I saw the intruder and yelled, “I see someone!” And I started to run towards her, she saw me and ran away. We were running for some time when she tripped and I caught her and brought Shannon back to jail.