It was a dark and stormy night when I realized we should play Silent Football. It all started when I was too sore and tired to swim. I decided after five minutes of chillin’ to get a group together and explain the rules. After explaining the rules, we began. The first round was a little shaky at the start because people were first-time peanut gallerians. A peanut gallerian is a player in the game. Elrond and David had a rivalry throughout the game. At the end of the game Reuven got three penalties. We thought of different consequences to decide his fate. He ended up having to hug Sonic and say, “I like your hair, it’s spiky like a hedgehog,” while petting his hair. 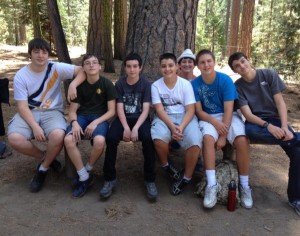 I love playing Silent Football at camp because it is super fun. I especially like being Mr. Commissioner because I get to control the game.

I remember when I first learned silent football. I was taught by the Comish (Mr. Commissioner) himself. It was at winter camp when I was seven years old and I’ve loved it ever since.

The next few rounds of Silent Football were interesting. Everyone’s dare involved Sonic until he banned it. One round David knew he was going to get three penalties, so while he was talking, he attempted to take everyone down with him. He eventually got 2/3 of the peanut gallerians another penalty. In the end, David had to hug Sonic like Reuven did while the other peanut gallerians lived to tell another tale. I love the game of Silent Football.