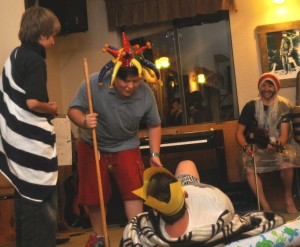 One of the best things about Camp Gilgal is Skit Night. The Skit Night this year was hosted by Susie and Stella (Poppins and Snapple). They would talk back and forth, and would call people up from the audience to do stuff (like singing). My tribe’s (Naphtali) skit was a restaurant that sold things like salvation and grace. Zebulun’s skit was a Bible story about a left handed man who killed an evil king. In my opinion it was the best skit of the night. It was really funny. They even had a violin in it! Another skit was a show about different beliefs. Part of the skit was a commercial about Justin Bieber (boo!). Issachar’s skit was about friends who broke promises to each other but still forgave each other in the end. A different skit was about three campers whose degel was stolen. They had to go past lots of temptations. It was hard for them, but they did succeed.