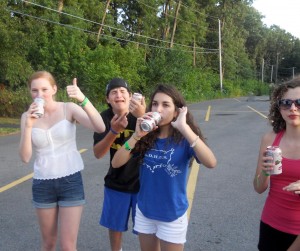 So, later on we had dinner. I ate a LOT!

Then, right after dinner was the Decathlon, and we had to stuff ourselves with crackers. It was hard being so stuffed as I was. Then, we had to chug down sodas and that was even harder. I managed to finish my can of soda then I had to help my friend Devora finish hers. We lost that round. Oops!