The Life of a Lion

Simba is a very awesome tribe leader at camp. Simba has been my tribe leader before, so I want you to get to know him. I asked him some questions about his life and I got some awesome answers. The first question I asked him was how long have you been here? He has been on staff for three years. The 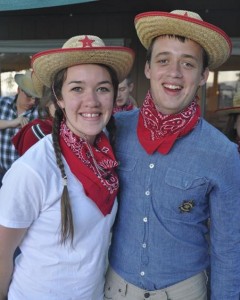 n I asked him what are some of his favorite sports and he answered Ultimate Frisbee and dodge ball. When I asked him what his favorite thing to do with the campers was he said Mission Impossible because it is a very awesome game to play with campers. If he had another job he would choose to do whatever God told him to do. Some things he likes to do for fun are singing and playing the guitar. I asked if he went to junior camp and he didn’t; he started at teen camp. I asked him what he liked to do at teen camp. He enjoyed paintball, jet skiing, and Capture the Degel. I asked him how he has been and he said, “Pretty good, thanks.” I thought I should ask him something crazy so I asked him what he would do if I pushed him off a cliff. He said he would most likely get hurt. I asked if he went horseback riding. He said he did and he had an excellent time. Then I asked him if he liked Wells Fargo. Of course, he said “Yes, it is a very fun game.” If you didn’t know, Simba is an awesome lion.

Making the Degel (Hebrew for Flag)