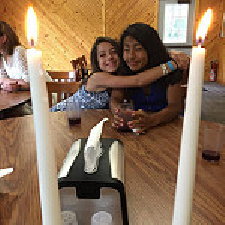 I like the rock wall. I don’t mean to brag, but I am pretty good at the rock wall if I say so myself. In all seriousness, the rock wall is a lot of fun. There are three walls: the easy wall, medium wall and the hard wall (but they call it the spicy wall). My favorite one is the spicy wall because it isn’t a normal wall that goes straight up, it has bumps and really small rocks to grip on. I first did that wall the first year I went to camp and I fell. I couldn’t even get past the first bump which was disappointing, but that changed the next year I went to camp. I tried the wall again and I made it up to the top that time and every other time I went on the wall.

This year was my favorite because the first wall I climbed was the spicy wall. I climbed that wall twice and made it to the top and moved to the medium wall where I would race people who challenged me. I raced four or five times, once with a tribe leader named Feedback and other times with campers. Long story short, I won every time and it surprised a few people, including myself. The tribe leaders who belayed me said that I was jumping like a frog up the wall which meant a lot of slack for them to pull (but that’s what Rafiki and Lone Star said, so I don’t know). The person on the rock wall staff I liked best was Hunter because before each race he would say he bet his money on me, which I totally thought was funny. That’s really all I have to say about my experience, so byeeeee.