Elliot A., Age 12
Tribe of Benjamin

Tribe wars is an especially fun part of Camp Gilgal. It all began one breakfast when Twister said two words. TRIBE WARS! We went back to our cabins for cabin clean up, tribe war preparations, and Tabernacle. After Tabernacle, we went into the field for several relay-like games. The first game we played when something along these lines: when Scooter blew the whistle we ran to the cone opposite of us. We then held hands and passed a hula-hoop over us, and then we ran back to the starting cone.

We then played a very fun game. We started at a cone, and one of our other tribe mates would run to the other cone, put on five t-shirts, do five jumping jacks, take them off, and run back.

After that we played a quick game. We ran to the other cone and lined up in a single file line. The person passed the ball over his head to the other person behind them 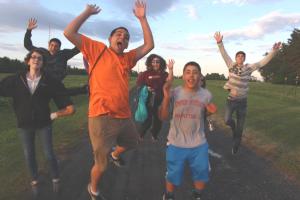 and went to the back of the line. Then the person with the ball passed it over his head until we get back to the starting cone.

We then did another game, in which we ran to a tarp, stood on the tarp, and tried to flip the tarp without stepping off the tarp. Soon after that, we went into the mishkan and took off all our shoes and socks. We put all or shoes and socks in a pile, and when it started we ran to the shoe pile, put our socks and shoes on, ran back, and high-fived the next person

We then played a game called Gaga, in which you use your hands to hit the ball at the other people’s legs. We also went bowling in the mishkan in which we rolled a soccer ball at cones. All in all tribe wars was AWESOME!!