The water balloon volleyball game was an exciting and interesting game. The whole camp gathered around the volleyball court. Some were cheering.

So first was Asher and Manasseh. It was an interesting game. The tribe of Asher threw the water balloon, but it didn’t make it. The ladies of Asher lost! Manasseh had three points.

Then it was Naphtali and Simeon. Simeon won the round with their powerful throw.

The boys were up. It was Dan and Judah. Judah won. Then Zebulun and Benjamin were playing. Zeb 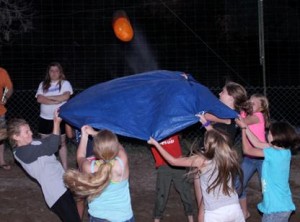 After that it was another game. From the girl’s side Simeon won and from the boy’s side was Zebulun. These were the champions of 2011 Camp Gilgal water balloon volleyball.

Now they were going to see, was it going to be Zebulun or Simeon. This was an exciting game. It took about 10-15 minutes for one of them to finally win. It was Zebulun!

After Zebulun won, then the staff played. It was men and ladies. The ladies were close but the men won.

Rain at the Creek