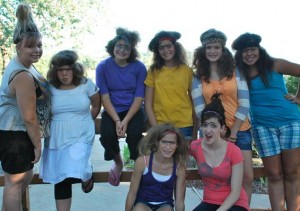 nights. My tribe wore tinfoil on our heads. I tried to make a helmet of a Roman soldier, but it sadly failed. One tribe dyed their hair red. Another tribe put uniforms on and put pony tails on. A tribe put their hair super crazy. I tried to make my hat, the whole entire time that we had to make our hair crazy. I thought that my hat would work really well, but as you know it failed and instead it looked like the iron giant in combat gear. Some people wore really weird and crazy wigs. I thought some people were so clever that they nailed it on being crazy and weird. I thought Crazy Hair Night was a crazy night.