This year at camp we played “Capture the Degel.” It’s a game where two teams go on two different sides, and hide separate degelim (or flags). Players try to capture their 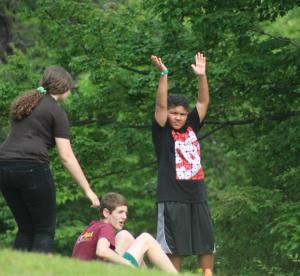 opponents’ degel. Once they find it, they bring it to their own side. If you cross the line and go in the opponents’ territory, they can tag you and take you to jail. To get your teammate out of jail, you have to tag them. There were many instances where people got caught trying to get their teammate out of jail. You’ve got to have speed and strategy. It’s super fun!

My team was especially good. We had a lot of good runners, Rebecca, Daniel, Jacob and Naomi. We also had great defenders, including Nature Valley, Sierra, Strider and Abigail. These were amazing teammates who I would love to play with again.

Capture the Degel is a fun-filled game, with much laughter and fun. I would strongly encourage it anyone. It’s a very fun, hilarious game with many laughs and it’s a good way to exercise. I had so much fun and definitely want to play it again.