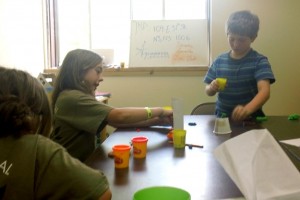 imagination. So what you would do is create some characters from clay, some props, a scene and a background. Once you are finished creating, you can start “filming.” To move your character around you would take a picture (the activity leader would), then slightly move your character in the direction or action it will go or do. The reason you move it slightly is because it will make the animation smoother. If you move it too far it will look like one giant motion and it will look terrible. That is pretty much the only disadvantage. I personally think that Claymation is one of the best activities there is! If you choose Claymation, you won’t regret picking it!