Climbing the Hardest Wall in Rockwall

October 14, 2016 / Cricket / Comments Off on Climbing the Hardest Wall in Rockwall

Click click, I was just clasped into my harness, and ready to climb. I yelled “Belay on” to my belay team, which was Goliath, Seth and Hannah. They replied “On belay,” which means they are ready to pull the rope up while I am climbing. Then I said my final command, “Climbing.” They replied back “Climb on,” and finally I am ready to climb up the hard wall also known as the spicy wal 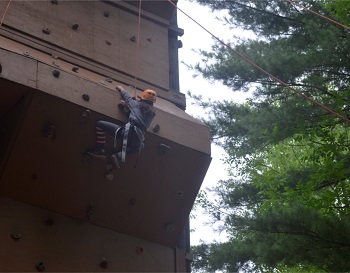 l. I raised my foot and put it on a rock, and then I raised my hands and started to climb. That was probably the hardest part because the rocks were small and full of the sweat of the previous people who failed to reach the top of the wall. It continued to be like that until the first bump came and then trouble had begun. My legs were burning and my arms were too short to reach most of the rocks. I felt like giving up, but my brother was next to me. He told me to go closer to his side so I could get over that section of the wall. I reached and climbed until I was so close to getting above and I could hear my team screaming and yelling, “Abi, you got this,” and “You’re so close!” I took a giant push and I made it. I felt so accomplished, and then I looked up in dread realizing I was only halfway up. I kept climbing with burning legs and hurting arms, but my adrenaline was high and on fire. I climbed the second bump with the same struggle as the first. I finally reached the top and I jumped for the bell to reach it. It rang and I was so happy and people and the bottom were cheering and yelling congrats. That was a huge accomplishment and it showed me that Jesus does the same thing in our lives when you put your trust in Him.