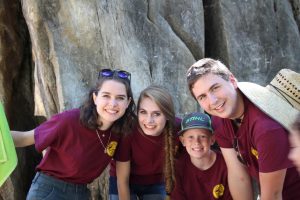 By: Eitan R. | Age: 11
Tribe of Reuben
On counselor Hunt Night, I had a ton of fun! Here are the things we did during Counselor Hunt. First, you go to a counselor (Camp Gilgal staff) and try to find out what personal, animal, or character they are being. After that you talk to them and try to get them down the hill by luring them. One of the characters that had to be fought was Superman. They stabbed him with kryptonite and took him the cure (lemonade). Another one of the characters was a Dad and you had to tell him good Dad jokes to bring him down the hill, but if you told him a bad joke, he would go up the hill. Gadget said, “I like how Counselor Hunt has evolved from a random animal to anything you want.” From the Avengers to football players to complicated animals. My favorite was the Football player. You had to get the ball, offer a contract, and give him a play to run. Eventually we got him by catching a really hard pass. I had a ton of fun playing Counselor Hunt.