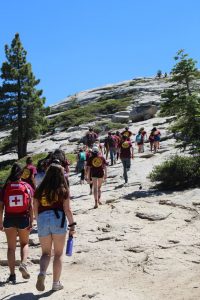 By: Lily H. |Age: 13
On July 16, 2019, the entire camp went on a hike in Yosemite National Park. After an hour and a half drive, we arrived in Yosemite, where we had Tabernacle and a worship session in a clearing. Moose introduced us to the edible needles on pine trees that tasted good to some and bad to others. We also ate lunch in the clearing, experiencing God’s creation. After we ate, we followed the main path to a viewing area at Glacier Point that showcased the main Yosemite attractions such as, Half Dome and Vernal Fall. The view was amazing. I also saw several squirrels racing on the steep cliffs. We had our camp photo taken by Dallas, a new camp friend whom Lonestar randomly met on the path, before realizing they had gone to college together. Then, we drove to the Sentinel Dome trailhead. This hiking path wasn’t paved and had a greater incline. The hike was tiring and hot, but the view of Half Dome and the surrounding environment at the end of the hike was breathtaking. The trail led to a Sentinel Dome that overlooked most of Yosemite Valley. It was fairly empty of people. Some campers played silent football and others sat on rocks taking in the view. I asked Joy what she thought about the view, “It was interesting to see how rock formations differed, one side was jagged and the other was smooth.” Every angle of the hill was different, from waterfalls to mountains to small buildings with toy-esque cars moving on distant highways. God’s work in Yosemite was a true blessing and an unforgettable memory.