CSI Gilgal is an activity at camp where we 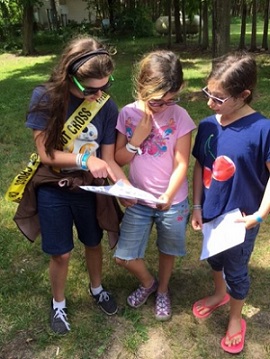 learned how to take fingerprints and got to create our own crime scene for each team to solve. One reason why I like CSI Gilgal is because you get to make up your own name if you are a suspect or a witness. I decided I wanted my name to be Nick because I was a witness in one of the crimes. In the crime that we wrote, Blewberry was kidnapped. The suspects were Alex Tek the caregiver, Bologna the sister, and Feedback the janitor. I was the only witness in the case because I saw Blewberry crawling right before it happened. Alex Tek was a suspect because she liked the baby too much, Bologna was a suspect because she was jealous so she wanted the baby, and Feedback was a suspect because he had to clean up after Blewberry even though he was injured. It was fun because the other team took a while to find the most obvious clue to help them figure out that the kidnapper was Alex Tek. The clue was sand on the picnic bench that they accidentally walked past. Eventually they found it and figured it out. I really liked CSI Gilgal. It was one of my favorite activities!