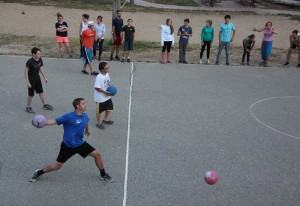 opposing team while dodging, catching and deflecting dodge balls from all directions. Some people who threw the hardest were Moose, Superduck, Sonic, Packer, and Zamboni. Superduck’s strategy was to put a ball inside the back of his shirt so Moose didn’t know it was there. It worked several times. Zion’s strategy was to stand as far up as she could go and not move. Sonic made a rule that if you are the last player on your team you can catch the ball and get your whole team back in the game. This only happened to my team. The last game which was for all the marbles. We were dropping like flies. Finally, Laney was the last player in and was against at least five players on the opposite team, and she caught a ball letting our whole team back in. I could see the disappointment on the opposite team’s faces as our team came back from our dodgeball grave to win and we did!