This is Pi’s third year at Camp Gilgal. He came to camp this year to spend time with campers and to have fun. Pi lives in Orange County. His favorite color is deep ocean blue. His least favorite school subject is English. His favorite animal is a lobster. Also, his favorite food is Mexican. His favorite activity is the climbing wall. During camp, Pi is an out-of-cabin staff member. Pi is a very funny person, and he is also really nice 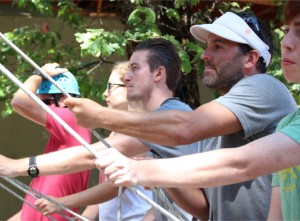 and friendly. At Bass Lake, he drove the ski boat that pulled the banana all day. It was hard work but I think he had fun anyway. Pi is a great guy to hang out with. Also, Pi likes to be helpful to campers and staff. During Capture the Degel, he played offense on the winning team. Pi’s favorite memory verse is Philippians 4:13. This is Pi’s favorite memory verse because Yeshua helps us to be strong. Pi is related to Esquire, Poppins, Ewok and Heimlich, but no one knows how they are related. Pi is a math teacher outside of camp. He also likes math and every form of pi. You can write pi three different ways: TT, Pi, and Pie. One of Pi’s hobbies is trying all different kinds of pie, his favorite of which is haupia pie, which is a chocolate coconut milk pi with Oreo crust. He especially likes eating pies with all his friends and campers if they’re around.