Fort building is a fun activity where you build a fort out of mattresses and a tarp. We first started out by taking mattresses out of our cabins and took them out by the field. By the field we have a circle of picnic tables and flipped them over for the walls of the fort. Then, we laid out all of the mattresses on the ground as the floor. The last step was to put a bit white tarp over the whole fort. 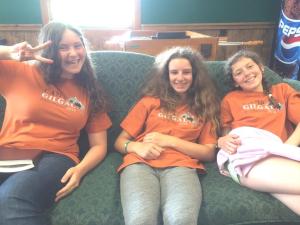 As soon as the fort was finished, all of the campers piled into the fort and relaxed (including Longshanks who took up most of the fort!). Everyone hung out inside the fort as we talked about the fun memories we had at camp over the past years. One of the memories that we talked about was from 2012 when Eden, Sierra, Abby, Sivan, Yael and I were in the tribe of Judah. That was one of the best years for everyone in that tribe because we were the best tribe ever! This was because all of us got along so well and we were really crazy. Also, we had the best tribe times and had awesome staff – Chickpea and Bologna! It was great to remember and see how we’ve grown together.

Fort building was a very fun and relaxing second activity.