On day three of teen camp, we went horseback riding. At first I was nervous since I’ve never really had a good experience with horses. The horse I got was named Caspian, and he was pretty big. He moved his legs a lot when we were waiting to go, which brought me to the b 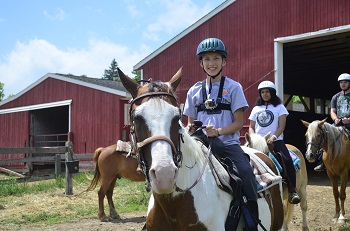 rink of tears. Bologna was behind me, and one of the workers was behind her which helped me feel a bit better. The beginning of the ride was a lot of stop and go, because the trainer said the horse I was riding needed more space than the others. We rode on the horse trails in the woods. Miriam and Jennifer were ahead of me. The ride was really fun and relaxing, and it was like a nature walk without the effort. I’m not nervous about riding horses anymore.