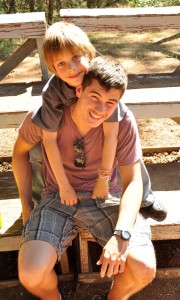 Stix is a very interesting guy to talk to. Stix is very funny and smart. He really likes music and he and I talk about it a lot. Stix is very good at drumsticks. He even takes very good care of them. When we did Time Warp Tuesday, he took the sticks and held them until we needed them for line up. Anyways, Stix is awesome.