Once this summer during a game of Nukum, the game got super intense. That is saying a lot, because this year at teen camp we played A LOT of Nukum. The ball was being heavily volleyed and was rapidly hurdled from team to team. Elizabeth was on my team and she threw the ball directly into the net. She got out on that turn, but then as soon as she was back in the same thing would happen again. She 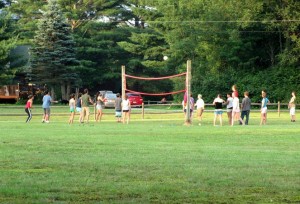 just couldn’t seem to get it over the net. We were all having a great time and everyone (including Elizabeth) just thought it was so hysterical, that it didn’t even matter.

In the same game, Long Shanks (one of the staff) who was also on my team couldn’t catch the ball. He had had too much practice with volleyball and couldn’t get used to catching and throwing the ball instead of volleying. Once he was trying to catch it but instead kicked it hard and it went really far. Maybe this is because Long Shanks is so tall, but the ball flew and hit Jacob’s chest on the other team. Everyone was pretty much in shock from laughter and for Jacob from the impact. Everyone was totally fine, but something like this pretty much happened in every game.

Nukum is my favorite activity at Camp Gilgal and I know that teen camp this year felt pretty much the same. There were always people on the Nukum court, even when we were on our camp out! I love it because it is fun, exciting, and competitive, moves quickly, and is a game that everyone can play. All of my favorite memories from this summer happened on the court and I can’t wait to see what next summer’s favorite game will be!