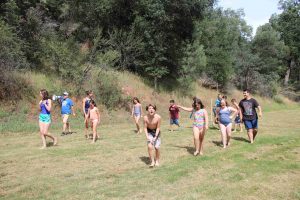 By: Ryan H. | Age: 11
Tribe of Reuben
The Oylimpics is the Camp Gilgal version of the Olympics. This year for the Camp Gilgal Oylimpics we did tug of war with a wet tarp, over and under with a bucker full of water, the three-legged race and golf. My team, the Togos, won over and under. Simidan would the three-legged race. Benjudah won golf and Simidan won the first round of tug of war and Benjudah won the second round, which makes Benjudah the winner! Simidan was second place and sadly the world famous Togos lost. Gadget says, “I really enjoyed the Oylimpics, it was a lot of fun!” Every team had a cheer, the Togos cheer was “Togos, the world best sandwiches!” The Simidan’s cheer was “Simeon Simeon Dan Dan Dan Simeon Simeon Dan Dan Dan!” The winners, Benjudah, had a cheer that was the girls howling and the boys doing a roar. I think the Oylimpics is a very fun game to play because you get to compete against your friends.

Q and A with Taxi