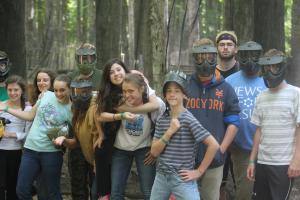 Paintballing was super fun this year. I had a blast! Last year, I was scared out of my mind the whole time. I just sat behind a wall and prayed that I wouldn’t be shot. But this year, I got so into it. I felt like a sniper while I was sliding behind platforms and hiding behind trees and shooting anything I saw. 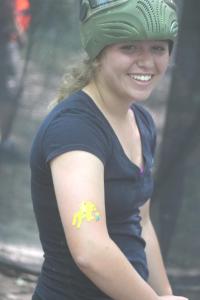 thing ever. I’m sad that I won’t be able to do it next year because this is my last year of teen camp.

My friend Kaylie accidentally shot me though. We were on the same team and I ran up in front of her without telling her while she was still shooting and she shot me in the leg from like two feet away. It hurt at first, but not for long.

We were playing this one game called “Blackhawk Down” and we had to shoot one person on the other team, which was Swank. Swank’s marines were protecting him. After we shot all the marines, they told Swank that he had to run for it and once he got up to run, we all started shooting at him and he fell in the river and got all wet and muddy. It was hilarious.

This year after paintballing, I learned to be fearless because there was really nothing to be afraid of. I hope that I will take that lesson with me and use it in the future.