Wednesday was another fun day at Camp Gilgal. After our morning activities, the campers split into two groups: one men and the other ladies. While the ladies left to do… something, me and the other men went to the rock wall. It was lots of fun. T

he rock wall had six sections, and I was told that number five was the hardest. There was also a practice wall that you could climb sideways on. I was told to do a wall, so even though I have a small fear of heights I climbed the first one to get it over with. It was fun, though, and maybe I will try it again. My friends, Isaac, Jacob, Ben, David and Rico cheered me on and also climbed different walls. Isaac climbed walls three and five. Elias climbed 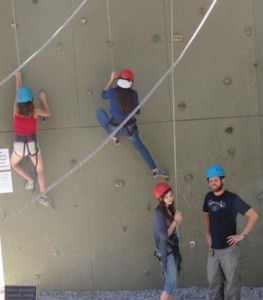 wall two. Jacob climbed one and two. Ben climbed three and half of four. David climbed one and three, and Rico climbed walls three and five. Our tribe leaders, Doc and Simba, were also very helpful. It was Doc who told me that I should try the rock wall in the first place. I don’t think Doc climbed any walls, but Simba tried wall four. He got about half way and stopped. In addition to the fun we had, there were some rules we had to follow and gear we had to wear. To stay safe on the walls we each wore a harness and helmet. I was very glad to have the helmet because on my way to my rock wall another camper slid on his wall and his foot hit my helmet. After I was tied to my wall, there were some commands I had to exchange with the staff member I was working with. I would say, “Belay on?” If the rope was ready the staff member, Daniel, would reply, “Belay on.” Then I would get ready to climb and say, “Climbing.” Daniel would reply, “Climb on.” Our climbing time seemed to end a bit too soon. Times flies when having fun. I recommend anyone who hasn’t tried rock wall climbing or doesn’t want to, to give it a try anyway. They could find it to be fun, like I did.