For an all-camp activity we play an amazing game called Screamo. Screamo is a game where you roll a dice and flip the tile of that specific number, and once all of your tiles are flipped then you win. In this game you have to choose a partner. My partner was Elliot. Also, he’s my fake twin brother. During the game, Elliot and I were winning every game until… the twins. (These twins are my tribe leader’s sisters.) They were the first people we lost 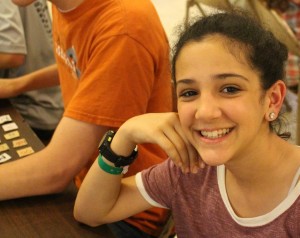 to. Elliot and I were sad because we lost. While we were competing against them everyone was yelling because the game is so, so, so, so intense. Sweat was dripping down our faces as we were flipping over the pieces and rolling the dice, and then all of a sudden the twins yelled “SCREAMO!!!” Once they yelled that, Elliot and I were so upset but they didn’t see their other card, so Elliot and I won and were so happy. We can’t wait to play this amazing game again next year.