After asking several other staff and comrades of Sonic, writing a simple article could not do him justice. Zamboni said he was responsible, Elrond said he was the “veteran tribe leader,” and Sarai, a camper, said he was funny and cool. It’s pretty hard to narrow down a guy where no one can say the same thing, isn’t it? Fortunately, I’ll do my best.

It’s my first year meeting Sonic, so naturally I was curious about who he was. So, one day, I asked him what gave him the idea of Sonic. I assumed maybe he liked the burgers or milkshakes from Sonic, the restaurant. He explained that Rocko and Snickerdoodle actually helped him come up with the name. 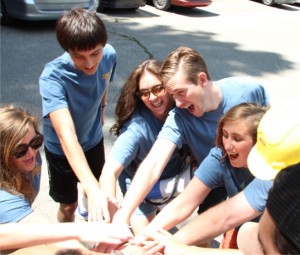 Speaking of friends, Sonic evidentially has a lot of them because he can’t stop talking about them! During his first experience at camp (as a nine year old), he was shy, self-conscious and a little scared, much the same as everyone else his age. But, he mentioned that what helped him get over his fear was getting to meet new friends. One of the best parts of camp is making unexpected friendships, and not just with fellow campers either! A lot of campers tend to be around the staff, so Sonic’s favorite camp staff (as a camper) were Waldo, Jaws and Kappuccino.

On a more serious note, I know from personal experience of the spiritual moments and awakenings that campers have had while at camp. Sonic had one of his own while at adventure camp when he went down to the river bank to worship. As he turned around, he realized the whole camp had joined him.

Now it’s my turn to describe Sonic. He’s an inspiration. Camp Gilgal is lucky to have him.

It’s All In the Wrist Action