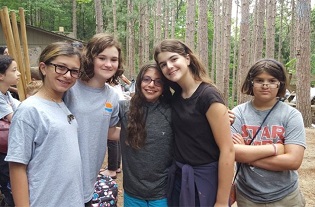 I liked the drama activity because we got to make a small play also known as a skit. It was about that week’s Torah Parsha which was Parah, meaning Cow. Our play was about the twelve men spying on Canaan. Since there were only eight kids, we had eight spies. However, they were modern day spies and their leader was Queen Momo instead of Moses. They were briefed on their mission, and then traveled to Canaan. One of the spies fainted at the sight of a big giant. The other spies had to use the socks to wake him up. After exploring Canaan they went back to Queen Momo. Six of them gave bad reports. The other two, Joshua (Josh) and Caleb (Kale), gave good reports. Queen Momo congratulated Josh and Kale on trusting the Lord and focusing on the good. The other six then died of a plague because they didn’t trust the Lord. I would recommend drama as an activity because it was really fun. The cast was Emily, Joshua, Lydia, Hannah, Max, Kaidy, Selah, Shoshi, and myself. It was really fun and we got to write the script by ourselves as well as pick out the costumes.