“Pull the shutter closed,” Rocky says. She is one of the camp staff that leads Photo Journalism along with Bologna. In Photo Journalism we actually got to build our own cameras that use real film. We had to keep the film in the dark room, which made it very difficult. First we made the cameras. To make them we had to take empty cans of corn 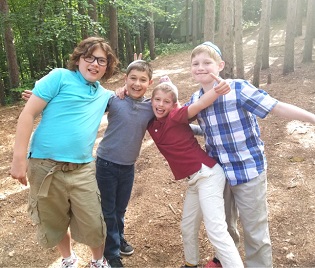 meal and spray paint them as black as a moonless night. Then you tape a bunch of black paper so that no light can get into the can because otherwise the light will damage the film and the picture will not turn out right. Make sure that you use black tape that blocks out every single drop of light. Then you need a red light so that you can take the film out in the dark but still be able to see the film and camera. Then you have to make the shutter and pinhole. You have to make sure they are tight so that no light can get through the camera. You then put the film inside the camera and close the lid, making sure that the shutter is closed. Then we went outside to take pictures. After taking pictures we went back into the dark room and developed the film. We poured chemicals into the buckets, and dipped the film into the chemicals. Each time after you dip, make sure to rinse the photo off with water. I even got to take my own pictures around camp. I chose to take one of a life size chess set. I call it “Illusions” since in the picture the white pieces are black and the black pieces are white. I had a great time in this activity, and I would recommend it.