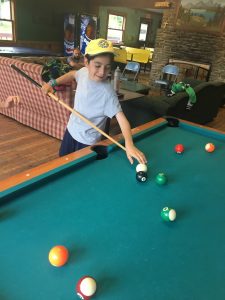 People usually go for a swim during pool time, but if you want to do other activities, you could play in the game room. The game room has two ping pong tables, two foosball tables, an air hockey table, and a pool table.

My favorite thing is that the rules were so easy to learn and because of that it was easy to win. Ezra was one of the luckiest players I played against. Another reason why I liked pool is because if you accidentally mess up you can still win. All of the boys liked the pool table. Some went swimming after playing, but I stayed at the table. So if you come to camp, there is a pool and a pool table, and I am awesome at both.