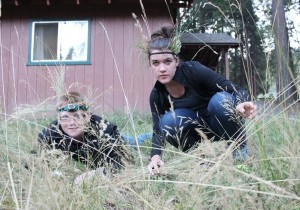 When we started Capture the Degel, we decided to place our degel and jail on top of a hill. Our strategy was to have one wave of offense and a strong widespread defense. We defended from the road, not allowing anyone through but no one came. We decided it would be a good idea to travel down the line and see their degel’s position. The position it was in was near the cabins, behind the ladies’ “luxury” cabin. Me and Matt had decided to go deep in the woods to make an attempt to flank the defenders from the degel. Then we realized that there was barbed wire blocking us off from the dirt road behind the cabins, which was where the degel was. Matt decided to break off and go for jailbreak, but instead was jailed. I went up from behind, called a jailbreak, and Matt was free and went to the degel circle, grabbed the flag, ran for his life and won. Reuven says that it was a lot of fun but he didn’t get in much of the action.