It all began when Moose told all of us to retrieve our sleeping bags and meet in the lounge. After five minutes of talking about sad pet stories, a screaming Sonic ran in the building and declared “Who is ready to play Capture the Degel?” Everyone was emphatic within two seconds. After a boring ten minutes of the rules being explained, we were finally ready to play a night time version of Capture the Degel. It was the male c 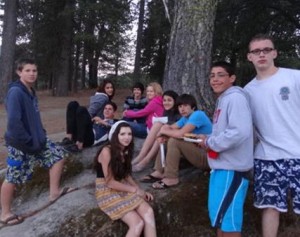 We decided to have about thirty people on offense, and ten on defense. Ten minutes into the game, I snuck out on my own. I was consistently running into other girls and letting them go.  Then, I heard a “Help us, help us, help us” melody. My destination was immediately saving them. Before I knew it, I was circling a bush with a male staff member and ran for it. I felt the wind of his arm swipe at me and he tripped. I could see the jail. I ran as hard as I could, touched Conner’s leg and yelled, “Jailbreak!” 90% of our offense was now in the flag circle. Another jailbreak occurred and I made it to the circle. We started planning instantly on what to do when snap. Roy tripped and distracted the defense. Matt, Noah and Jacob Stout bolted away. After 30 minutes of waiting in the circle, the whistle blows. Our whole team dashed back and we hear a bunch of cheering. Noah is holding the flag, and we won.

After hugging me tightly for saving the team, I got a bunch of celebratory high fives and hugs. There were lots of war stories, and photos to add to what was already an amazing game of Capture the Degel.