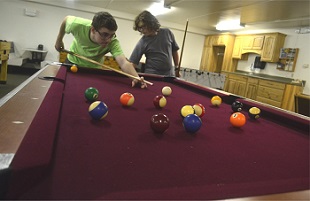 On Friday, July 15th, we played Counselor Hunt. We played it in downtown Grand Rapids. We drove in a fifteen passenger van, and it took us over an hour to drive there. I sat in the back along with some other campers while Blewish drove. While he was driving he did not put the air conditioning on and Bologna didn’t put any music on, so it was an awkward silence the whole way there. We were told to be on teams of three, and to choose our own teammates. I was on a team with Lily and Nena. We were then given an hour and a half to find the counselor. The first place we went was to a coffee shop, but even though we didn’t find anyone there we saw Rocky outside and told her to hide in there. We walked around for a while and eventually found Bullfrog in a deli. Next we found Bologna and Baloo sitting under a tree at a park nearby. Now the only one left was Goliath, Lily thought. But she had really seen Goliath dressed up earlier, but hadn’t realized it was him. She said it was either Goliath or a really ugly lady she saw near the beginning of the game, but we had walked away. Later near the end we went to another coffee shop and when we looked into the window we saw a Goliath wearing a skirt, wig, hat, glasses and having shaved his beard. After that we went back to camp and Goliath was driving, while Rocky played music and we also had air conditioning.