This year at Camp Gilgal we played Mission Impossible, but there was a twist from the usual rules. Instead of sneaking around looking for clues, while trying to not get caught by spotters, we snuck around all of camp looking for glow sticks. We were given a clue as to t 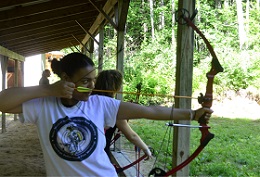 he different locations of the glow sticks. The goal was to collect the most glow sticks with your team. After we were all sent out and went our separate ways, my team went to the dining hall first. We chose to go there because we assumed there would be more spotters at the other locations. After the dining hall we made our way to the rock wall, but we were spotted by Bologna and had to return all the way back to camp. Soon after that we saw a spotter get picked up in a van then we realized that no one was spotting anymore. We then ran to the lake and saw that everyone gave up and went back to camp. After all of the teams were back and glow sticks were counted, we realized that our team had won by one glow stick! I was excited I hope we can play this version of Mission and Possible again.