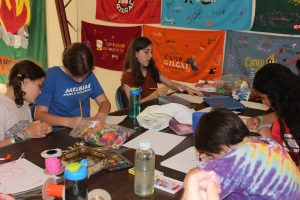 By: Chloe S. | Age: 12
Tribe: Reuben
Do you like working with your hands? Well, I do. This year at Camp Gilgal we made challah plates for Shabbat. We used a wood burner but first let me fill you in on the steps. First, we drew a design on a piece of paper. Second, we had to enlarge the design with a little bit of help from the craft teacher named Shark-bait. We had to enlarge the design so it could fit on the plate. Third, we had to do the painful job of sandpapering the challah plate, which was to me like death to my ears, but after that was pretty fun. Fourth, we had to draw the enlarged design on the sanded plate which was hard because you can’t press hard with the pencil, but after that we started the real challenge of burning the wood. Fifth, we had to burn the wood and that was fun but the two downsides where we had to wear gloves that that where heat protected, and the wood burner was hot and I mean hot like if you burn yourself you should see the camp nurse. Finally, sixth after all of that hard work, we got to put the last thing on your plate, and that was oil we had to put oil because it would be the sealer and after the oil dries you can take it home to put challah bread on your plate I hope you like craft as much as me!

Sing and Dance for Your Mail Night