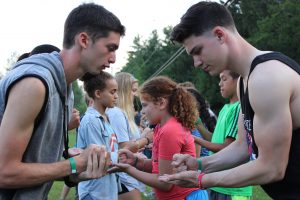 This is my first year at Camp Gilgal and one of the many fun things that we did was the decathlon. This is an activity that all of camp takes part in. we split into two teams that compete in ten different activities. Fun fact: the deca in decathlon means ten in Greek, and the athalon means competition. The first thing we did was pick team names. My team name was “The Petitioners,” and the other team was “Chuck Norris Pomegranate Lotion.” We then made a team cheer that was funny and silly. We also made castles out of food. Some of the food that we used were citrus slices, dry ziti pasta, cheese puffs, milk duds and bamboo skewers. For this activity, we had to communicate and work with each other. We also had to come up with a story about the castle. Our team’s story had a princess, a ball pit and a prince. Another activity was the soda chug. We had to work with our teams to drink an entire pack of soda. After we finished, we had to build a tower out of the cans; it had to be sturdy and tall. The soda tasted good, but it was a little too much for me! Throughout the whole game, we constructed a duct tape hat that we presented at the end. There were a lot of other activities we did, and they were all so much fun and a great experience for my first year at camp.