Here’s a glimpse of my cabin, which includes Acorn and Waffles as tribe leaders and Vika, Leia, Destiny, Eliana, Abbey and myself (Gabby). We were all chosen to live together for a week. While driving to camp all of us were in the same van. The first day we were warmly introduced by all the tribe l 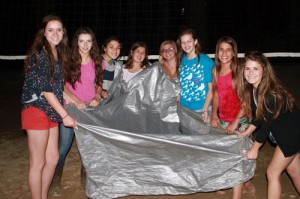 eaders. Later we were given a cabin and then got acquainted. At around six we went to dinner and sat as a tribe.

After worship we settled down and started devotions. Then it was time to sleep.

When I woke up everyone was slowly blossoming and creating new friendships. After we woke up and ate we got in the vans and headed to Yosemite. While we were there we went on a four mile hike. On the hike we talked to most of our friends and our cabin mates.

On the third day we put all our friendships to the test during initiatives. There were three sections. In the first one it required us to build a bridge which made us communicate and have a strategy. The second section required us to stand on a tree log and get in order from tallest to shortest. This made us work as a team and talk. The last section required us to reach a rope wing and reach the ElevatedIsland. To me this was the hardest activity. This section made us consider something that might be harder for other people.

Later than night we played Capture the Degel. It was men with ladies tribe leaders against the ladies with men tribe leaders. Leia and I grouped up and found Vika and Eliana. On the fourth day we went to Bass Lake, and you could swim, jet ski and go on a banana pulled by a ski boat. Almost everyone did something with a cabin member.

I hope the next two days go wonderful and that we hopefully talk over the year and see each other next year.