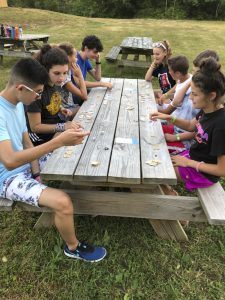 This year at Camp Gilgal, Scream-O was extremely gnarly. Elie and Netanya began their Scream-O adventure thinking that they would be absolutely rubbish at the game, like all the other years. Because Elie and Netanya had good sportsmanship, they decided to yolo it. Even if you lose at Scream-O it is incredibly fun.

Now it is time to assure you of how epic this game of Scream-O truly was. The game is played with two partners, which obviously was Elie and Netanya. They then randomly choose one of the tables to play at, but the catch is that they had chosen table #11, which is the hardest table. If you lose at table #11 then you would have to go all the way to the end. When that happens, you are pretty much dead meat and there would be no chance of winning.

This game is based on chance, so it takes no real talent to play it. Scream-O is a brilliant game that is unique to Camp Gilgal. It basically consists of rolling dice and adding up the sum, but for Elie and Netanya they added on their fingers despite their age. 🙂 The game is played with many rounds, so winning or losing is usually no big deal.

That being said, Netanya and Elie started their first round of Scream-O carefree and laughing, as usual by the first round, their fate had changed. They had won. They were beats. They couldn’t stop winning. By the third round they were both so incredibly hyped up and yelling to the extent that their voices had dropped three octaves. Scream-O was super duper dope. We were undefeated for a massive total of 12 rounds, making Gilgal history. This ends our epic, wicked, and super gnarly Scream-O adventure at Camp Gilgal East Teen Camp 2018.

On the Gilgal Gazette