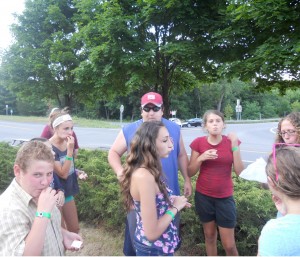 The first event was the alphabet game. What we would do is take the first letter on a sign, and we would find those letters in alphabetical order while we were driving. The next event was the eating saltines and whistle game. Each team had to east a box of saltines and then whistle to Sox or Blewish.

One of my favorite events was the spinning in circles event. It was a test of endurance and balance, and we spun around for close to 20 minutes. The team with the most people standing at the end won. Another event was to build a flower basket out of duct tape. Another event was the catching fireflies event. Each team had to show three fireflies. The team that won showed the same fireflies three times. One of the other events was to write a team haiku. Our teams had to write and present a haiku to the judges.

The Decathlon was a lot of fun and I can’t wait to do it again next year.