The Great Game of Carpet Ball 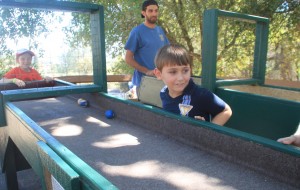 My name is Alex but I go by Sasha. I’m 11 years old. I’m in the tribe of Benjamin. There are rules and throws and plans. The Rules: If the ball goes off the table you are out. You put five balls on the table. To win, you knock all five balls on the other side. You lose if the other player knocks your balls out. Throw: You can throw the ball many ways. We call them names. So far, there are three that have names. People have many ways to throw the ball.  Here’s Nathan’s point of view. He said the Heimlich is the best. Plan: There are many plans in carpet ball, like how you place the five balls. One way is put three on one side and two on the other. Or, another way is to put all five on one side, or four on one side and one on the other side. Opinions from Jonathan, “It’s a lot of fun and cool.” Steven hates carpet ball.