The Tribe of “Snaggletooth” 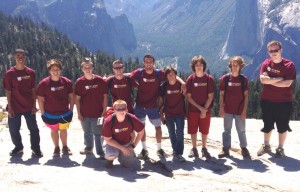 This year I had the pleasure of staying in the cabin of Azalea! I have never been in a cabin quite like this one. First off, the men in the cabin all like to argue and debate, so getting a bunch of men together for devotions can be kinda crazy! Other than the arguing the cabin is really swell! In an interview with Emeth P., he said that he would describe our cabin as “confusing” if using only one word. Our cabin leaders were Sonic and Super Duck. Both were awesome. I feel that God really used our cabin this year. I really felt that each and every other guy in the cabin was my brother. We were all very supportive of each other and loving! The tribe leaders were also very supportive and willing to talk about anything! One of our most memorable moments is when we were doing devotions. We spent about two hours debating on some theological things. I’m sad to be leaving camp this year, but I’m very excited to be returning next year at adventure camp! I love camp and I always will!

Dinner at the Creek