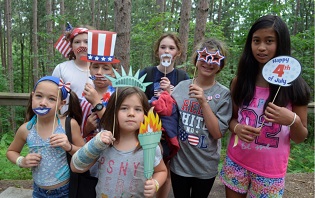 In the activity Theater at Camp Gilgal we acted out the story of the twelve spies that investigated Canaan. We chose that story because it was the Torah portion for the week. It was a lot of fun and we all got to have disguises. Because there were only eight of us, we decided to have six bad spies and two good ones. Moses was called Queen Momo, and each spy had a silly nickname too. Queen Momo briefed them on their mission, and the spies were on their way. It was a beautiful day, so they traveled along the long road easily. Then they ran into giants and one spy fainted! Another spy cried out “Quick, get the sock!” They waved the sock in front of the fainted spy’s nose, and he woke up immediately. They then threw the sock away. The spies continued along the path. They stopped again when they saw milk and honey. There were also grapes. The spies immediately ran for the grapes, and they were so delicious! The spies sat for what seemed like hours eating grapes. Eventually one said, “We should bring some of this food back to Queen Momo before we eat it all.” The other spies agreed, so they began their journey home. When they arrived they gave their reports one by one. “Too many giants!” one said. “We can’t do it,” said another. “If we trust in God we will take the land,” said one of the good spies. Queen Momo debated what she had heard. The skit ended with the good spies being congratulated and the rest were struck down by the Lord for not trusting in Him. Riff Raff helped us to write the play and to stay on topic as we did it. It was a lot of fun even though two of us got sick. Riff Raff was great for Theater!