The Kingly Rules of Four-Square 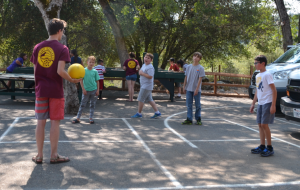 Four-square, the game of four squares. The four squares represent the four stages. Stage one is peasant, stage two is knight, stage three is prince or princess, and stage four is King or Queen.

More rules are: no tea parties, which means you can’t hit the ball back to the person that served it to you; saves/play-ons, which means that if you are supposed to be out but people keep playing you aren’t out; ducks, which is popcorn and then you hit it just inside the other person’s square; memory verse which is when you recite the memory verse as you hit the ball; cherry bomb, which is a big slam with both hands; pork chops/kosher/pork chops, which gadget won’t explain to us; no first serves, which means if something goes wrong on the first serve you are out anyway; truces, which are two man truce with two people, alliance with three, and empire truce with four or more; ground spoke, which is big slam with one hand; and Atlanta, which is normal four square.

These are many of the kingly rules of four square, but these are the rules as of July 26, 2018. There are sure to be many more. The end.

The Hardships of MI