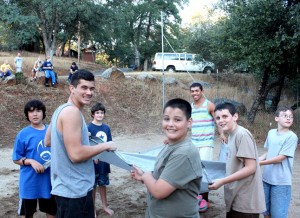 e side of the tarp keeping it tight so our tribe could launch it. To catch a water balloon, our tribe had to try to move the tarp wherever it was going. They made up something called the “23rd Annual Glorious Double Elimination Bracket System Tourney” and this is how it goes: it is very complicated and when asked, Sonic declined to comment. During the night all the tribes cheered for each other. My tribe came up with the best cheers and dances, and it was so much fun cheering for other tribes. One of the cheers we did was, “Simeon sharp as a blade.” My favorite part was the championship game. We played Reuben and beat them the first time. Because the girls were undefeated we had to play against them twice. They won the second game which made them champions. We came so close. It was sad but I am happy that we got so close. Hopefully my tribe will win next year. We did a good job doing it. Thank you, staff, for putting it together. I can’t wait for next year’s game. I really liked it!

Q: How did you like water balloon volleyball and why?
A: He liked it very much because we kept winning.

Q: What is your favorite part about water balloon volleyball?
A: His favorite part was playing the girls in the final championship.