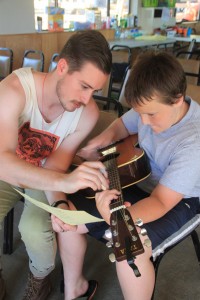 Rocko and Snickerdoodle came up with Sonic’s name because he’s so fast. Sonic has been at Camp Gilgal for 17 years. He leads worship in the dining hall for Tabernacle. He sings songs and shouts it out. First he says the song title. We sing two songs every day. His favorite song is “To Our God.” Sonic has one brother and one sister. His wife is Rocko. He said that his favorite activity at camp is Capture the Degel. He was the boss for all the other staff. Sonic loves wildlife and seeing it during night games. As a camper, he liked Capture the Degel, Wells Fargo, and Mission Impossible. He likes camp because his best friends are there and God is there. Sonic really likes playing the guitar and worshipping God. He likes the guitar because it sounds nice. When Sonic gets mail he gets excited and does flips. When other people get mail, he claps for them because he wants to be nice to them. He knows it’s the nice thing to do. When he tells about his life at campfire, sometimes he has sad stuff in it, but he told us God is with him and he believes in Him. I like that Sonic helps people and is kind. He treats people the way he wants to be treated no matter what because he knows it’s the right thing to do. He also helps people when they fall. When I think of Sonic, I think of him being nice to us and being funny. Sonic is a good person and is the best staff I’ve ever seen.