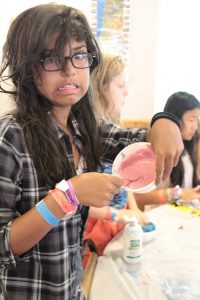 Ladies Day was so amazing! The theme this year was science. We made slime, around Chex mix and handmade ice cream! But first we had to go to lunch.

We had to say something for the lineup, Mango suggested a science joke. I was wondering “why science?” but instead of asking I just said “OK.” After everyone said their things, Chip and Macaroni came out and were scientists! They had a clipboard that read “NO MEN.” After that we went and ate lunch. When we we’re done with lunch we had FOB (flat on bunk).

After FOB we were told to get in our swimsuits, a lot of ladies thought there was going to be dry ice in the pool, because the theme was science.

After we got in our swimsuits, we waiting for two minutes. When we got the OK to go down by Chip, everybody looked at the pool to see if there was any dry ice, but we were wrong. They didn’t set up the stuff so everybody was saying there’s nothing there etc. Chip sent us to the pool.

After an hour or two we were told to get out of the pool. When we got out of the pool we were off to do activities like making our own Chex Mix slime and handmade ice cream. It was really fun this year Lilly said that the “theme was science” and that she had “lots of fun!” I also had lots of fun and an amazing Ladies Day!!